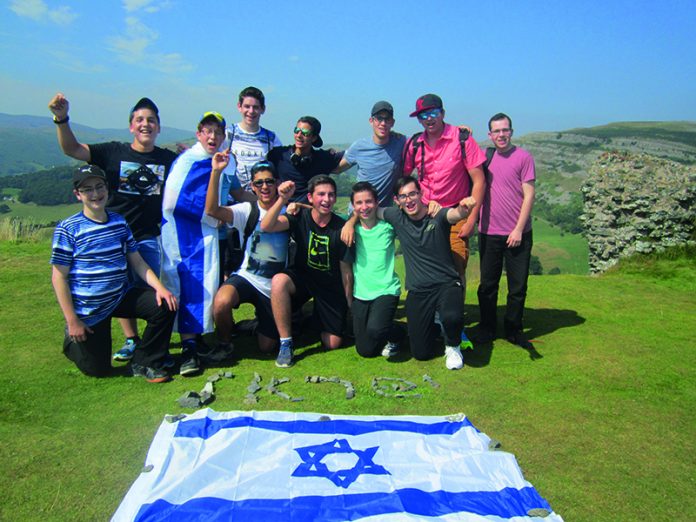 The progress the orthodox community has made over the last few decades, is to the credit of a number of individuals who have acted with incredible foresight and determination.

One such person is the indefatigable Shmuel Yosef Davidsohn. The Stamford Hill-based community activist has risen to two of the most challenging tasks the Jewish community faces: occupying the youth and securing our interests.

Our conversation starts with the former. As executive director of internationally renowned Chaverim youth group, Shmuel Yosef directs northwest London’s sole youth organisation for the strictly Orthodox community. Upon his return from yeshivah 26 years ago, Shmuel Yosef found a niche in his local community and founded South Tottenham Jewish Boys Group. A short time later, this morphed into what is today Chaverim Youth Organisation. He has since moved the main efforts to northwest London but is still active with the youth of North London.

The weekly programmes are aimed at boys ranging from age 10-17. This includes weekly shiurim and recreational activities during the weekday evening, as well as motzei Shabbat. The organisation manifesto expresses their offer for “Intelligent Sport and Adventure programmes focused on motivating and building our boys’ character.” In the youth centres, they aim to provide computer and sports facilities, as far as communal funding allows.

The running of this organisation entails a full-time office, where ideas and their implementation take place. Additionally, Chaverim offers Shabbatonim: a Shabbat away four or five times a year, where Chaverim offer over fifty boys a holiday weekend retreat, packed full of fun activities and youthful inspiration. The programme is more than simple “kill-time” fun; Shmuel Yosef sees leadership qualities in many of the children the organisation comes across and so offers leadership seminars to equip the young charges with the wherewithal to be community drivers.

Twice a year, Chaverim offers fortnightly camps, one in the summer and, unlike any other organisation catering to the strictly Orthodox, a winter camp. The size of these camps fluctuates, with the intake in the region of 100-150 boys. Shmuel Yosef feels that by limiting the attendance at the camp, the boys can thrive in a smaller setting and enjoy the experience far more.

Among the weekly activities, Chaverim have a programme geared at A-level students and older teens. Called “Achim” it invites this age group to socialise and enjoy a shiur over kugel and hot cholent in a cosy setting, perfect for occupying the upper teens in a “kosher” setting. In addition, Chaverim guides boys to the correct Yeshiva setting for them, be they here in the UK, in America or in Israel. This is besides liaising with schools and parents – offering help with homework and school studies.

Since 1991, Mr Davidsohn has offered the Jewish community a service that is every parent’s dream – a clean environment for their teenage boys to socialise and thrive in a caring and fun environment. 26 years means an entire generation of grateful teens and their families who have in some way benefitted from the multiple options offered by Chaverim. All this has been done with the guidance of rabbinic figures and pedagogues. In the words of a distinguished northwest London rabbi, “Chaverim is a real credit to our community.”

In addition, Mr Davidsohn is responsible for the security concerns of the community. From small local events to gatherings of over 10 thousand, he works closely together with the police and the CST to face up to the ever-growing security threats our communities – and as recent tragic and barbaric events have shown, the entire civilised world face. Through government funding, Shmuel Yosef ensured that all the local Cheders took it a level further and allotted £1.3 million of CST funds in enhancing the security infrastructure of many Jewish schools, which paid for CCTV cameras, alarm, gates, windows and doors in local institutions.
With Shmuel Yosef as the security coordinator for the chareidi community, over 50 members of the Stamford Hill community are now fully trained as volunteers and have been taught the skills for action in case of any incident, G-d forbid.

Most importantly, Mr Davidsohn chairs the Independent Advisory Board for the Police in the Haringey Area of North London. It is there that the strictly Orthodox have earned the respect and admiration of numerous officials who appreciate the caring but no-nonsense approach of Mr Davidsohn. In 2015 he received a commendation in recognition to his contribution to the policing in Haringey and London. He also sits on the Metropolitan Police’s Central Independent Advisory Group for Diversity. David Lammy, MP, who has also worked hard for the community, enjoys a close relationship with Shmuel Yosef, who hosts an annual Chanukah reception in Mr Lammy’s honour. His work with the council has also helped families secure planning permission for home extensions, also providing relief for local families.