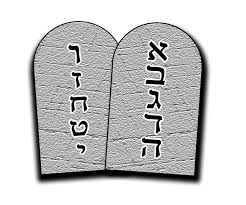 In this week’s parshah the Jewish people are once again told about keeping Shabbat.
Moshe goes up the mountain to get the Luchot from Hashem.  The Luchot were the tablets that had the 10 Commandments inscribed on them.
The Jewish people knew that Moshe was supposed to come down after forty days, but they miscalculated the date. When he didn’t come down when they expected him to, they built a golden calf and made it into an idol to worship. When Moshe came down, he was so shocked by what he saw that he smashed the Luchot.
Hashem was very upset with the Jewish nation for serving an idol, so Moshe prayed to Hashem to forgive them for their sin. Moshe went back up the mountain and got the new Luchot.