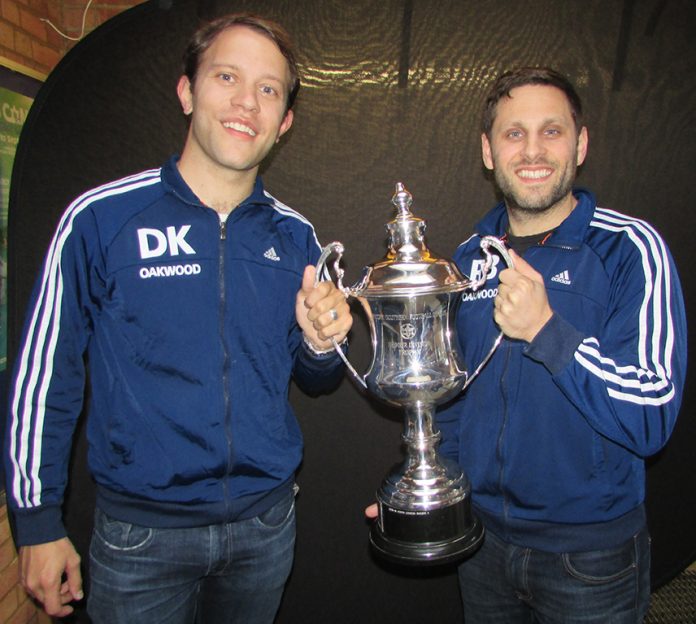 Redbridge Jewish Care A needed to defeat third placed Hendon United A to pip Oakwood to the title by a point but lost 4-3 in a thrilling encounter at Hadley FC.

Oakwood joint-managers Daniel Kristall and Rik Blank were kept informed of the heart-stopping action throughout the match.

“To win the title is huge for the club and we deserved it,” said Kristall.

“We made a shaky start to the season and went out of the Peter Morrison Trophy early so we could fully concentrate on the league.

“Everything turned when we beat Hendon in consecutive weeks at their ground. From the turn of the year we had belief and went on an unbelievable run.

“We didn’t beat teams by seven or eight goals like Hendon and Redbridge but had the best defence in the league conceding only 15 goals.

“The key to our success was being solid at the back. We were a very workmanlike team, difficult to break down; we nicked games and finished the strongest side whereas other teams struggled as the season went on.

“All the lads are buzzing and I’m really please for Ric; he’s been involved for over 10 years so it’s an amazing way for him to bow out.

“He’s seen Oakwood go all the way to the top, which is fantastic.”

“It’s an amazing sense of achievement for everyone but it’s a stepping stone. We want to retain the title but also want to go for the cups.”

Kristall added, “Redbridge will be disappointment but they’ll be challenging again next year.

“The biggest surprise was they didn’t see the game out after going 3-2 ahead late on but once pressure is involved anything is possible.

“For the integrity of the league it was important Hendon went for it, and they did, so you have to give them a lot of credit.”

Blank first played for Oakwood in 2006, and though he is stepping down as co-manager he will still be associated with the club.

“The boys were messaging me and it was horrendous getting the updates, but in the end it was amazing, just an incredible day,” he said.

“I’ve won Division One and Division Two but lost three finals, so to win the Premier title is unbelievable.

“We’ve improved so much over time and this year have become a serious outfit.”

He added, “It’s amazing for the club to win the title because you get that taste of winning, so I’ve challenged the boys to now win two trophies in a season.

“To be compared with great amateur teams they win in batches over a few years and that is what they have to now aspire to doing.”

It was a case of what might have been for Redbridge boss Jon Jacobs’ battling team who were league runners up and Anekstein Cup finalists.

“The game was probably one game too many for us,” he said. “We wanted to show that we were the best team in the Maccabi League but have just come up short.

“We had the title in our hands when 3-2 ahead but Hendon equalised almost immediately to bang the door shut. Redbridge will be back to challenge next season and this time, hopefully will go one step further.

“I congratulate Oakwood on winning the title; the table doesn’t lie and they deserve all their success.”

In a quite astonishing end to the season, Avi Korman opened the scoring for Hendon with a penalty kick only to be pegged back by the title chasers when Zac Neiman equalised with a powerful header from a corner.

Redbridge wasted opportunities to take the lead and Hendon made them pay when Zac Lewis edged Hendon back in front with a close range finish.

Hendon then went close to a 3-1 lead before half time.

Redbridge leveled when Steve Summers nodded home shortly after coming on as a second half substitute on 72 minutes. And the Essex team thought they had clinched the title when Sam Sollosi slotted home three minutes later.

But moments later Josh Harris equalised to set up a nerve-jangling finish to the game.