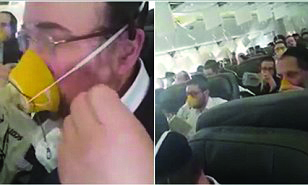 Passengers on a packed chartered flight from Stansted to Rzeszow made national headlines this week after their Boeing 767 declared an emergency when the cabin suddenly lost pressure and the plane fell in height from 30,000 feet to 10,000. The flight carrying 265 members of the Orthodox community along with crew members were about 30 minutes into their journey and probably still over the water when the automatic cabin alarms sounded.

Passengers and crew raced to their seats as oxygen masks were deployed and a mayday call was made at 0943 UTC last Sunday. The flight path was immediately cleared for an emergency landing at Schiphol airport in Amsterdam and the Titan Airways flight landed safely approximately 20 minutes later.

Video taken on board showed passengers extremely tense wearing oxygen masks whilst reading Tehillim and singing Ani Ma’amin, meaning, I believe. There did not appear to be wide spread panick.

The flight chartered by Mr Avrami Feld was on its way from Stansted to Rzeszow in Poland as part of the annual visit to the grave of Rabbi Elimelech of Leżajsk.

Every year thousands travel to the Hasidic leader’s burial place on the occasion of his yahrzeit. Mr Feld’s company, Perfect Travel based in Finchley, London, has been bringing mostly London based Orthodox Jews yearly to Rzeszow since 2003.

Rabbi Elimelech died in 1787, after which his grave became a segular, special holy place to have prayers answered. His burial plot is about 30 miles from the city of Rzeszow where the plane was supposed to be landing. But after the flight arrived in the Netherlands, passengers were told the trip could not continue and plans were made to return to London. Some booked flights while others took the train.

Mr Feld’s son Uri, who also works in the office, explained it was quite a frightening experience. “Suddenly there was a small bang like a pop, similar to when the wheels come down. It did not sound like an explosion but then the plane began to descend and the alarms went off.”

Both Uri and his father explained that although none of the passengers checked in any luggage because it was just a one day trip, an enormous amount of kosher for Pesach food was loaded into the belly of the plane to be delivered to poor communities in Belarus. “Matza, grape juice, oil, eggs, chicken, tuna, eggs and anything you may buy for Pesach was brought along” Uri said.

The plan was to unload the food and have trucks drive the food from Poland to Belarus. But as far as the company knew, the food was still sitting in the belly of the grounded flight and Uri warned there was a good chance the frozen chickens would now not be edible.

A spokesman for the airline company said “There were no injuries amongst the passengers and crew but on arrival the aircraft was met by emergency service personnel as a precaution to ensure the welfare of the passengers.”

The airline did add that “Whilst such events are rare, all Titan Airways crew undergo regular rigorous training in accordance with EU EASA regulations to ensure they manage such situations successfully.”

Uri confirmed that all passengers will receive a full refund whether the airline pays or whether an insurance claim has to be filed.

As for another trip same time next year, Perfect Travel will be advertising again in January 2018 and will hope and prayer that this time they reach their intended destination.