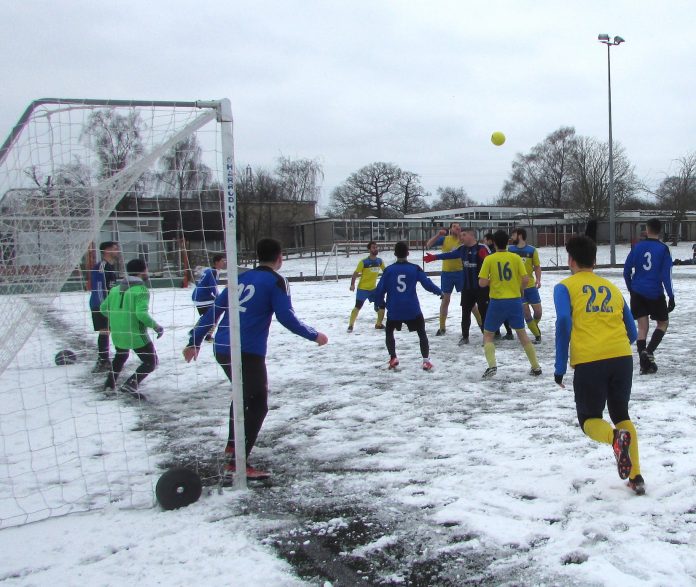 League and cup football was all but wiped out on Sunday with only a couple of matches surviving freezing, inclement wintry weather.
FC Team mastered a snow-bound pitch and sub-zero temperatures in a 7-0 rout against Catford & Bromley to continue their Division Two promotion charge.
Rob Sanford marked his first game of the season with a hat-trick to head the scoring accolades in a comprehensive victory.
Richard Salmon, Marc Hecht, Adam Rones and player-manager Mitch Young, who made five goals, also hit the target.
Young thanked Catford for helping get the game on and the match official for allowing it to go ahead in difficult conditions.
As for the game, he was delighted with his team’s performance.
“Considering the conditions some of the attacking football was very nice and to score seven goals was very pleasing,” he said.
“Congratulations to Rob on his first game of the season to score a hat-trick. Having his experience at the back and obvious goal threat from set pieces will be very welcome in the final few games of the season.”
Young praised left back Jamie Breslaw’s calm performance and midfielder Adam Rones’ use of ball. Noting that Marc Hecht bossed the game in midfield, he said striker Richard Salmon was a constant threat in attack.
Young added: “This was a great warm up match for our cup quarter final (versus Bayern Mincha on Sunday).
“We are looking forward to putting our wits against the favourites for the competition.”
In the only other match to beat the mini-freeze Faithfold B edged a tight Barry Goldstein Trophy cup encounter in a penalty shoot out against Hertswood Vale.
Hertswood opened the scoring in normal time when Elio Elia pounced on poor defending on three minutes.
The home team had chances double the lead but Chaim Bordon equalised with a 25-yard free kick to sentd the match into a shoot out.
Like the match, it was no surprise the shoot out went into sudden death. And Faithfold prevailed when Josh Martin slotted home the crucial spot kick for an 8-7 shoot out triumph.
“We were delighted that both teams managed to get the game on despite it being the coldest I have ever been in goal,” said Faithfold boss David Garson, who saved two penalties in the shoot out.
“Penalties are a great way to win when you are a manager and a goalie to boot.”
Jacob Emanuel of Hertswood Vale praised both teams for clearing the pitch and the referee for ensuring the match went ahead.
“Sadly, the snow was about as interesting as it got,” he said.
“After taking the lead disappointingly we dropped off and allowed Faithfold to control the ball in midfield.
“Faithfold equalised with their only shot on target in the first half, but in all fairness, it was quite a free kick.
“The second half we wasted a few chances to take the lead, but in fairness to Faithfold, if it wasn’t for two excellent last ditch challenges from Alex Trup and Ashley Hirschberger we may have found ourselves behind.
“We were on top for the last 20 minutes but with only 11 players available and a number of key players missing, we never got the second goal we deserved on the balance of play.
“There was no time for extra-time that would’ve been ideal so ensued a long penalty shootout and the new ‘ABBA’ system caused much confusion.
“Although Joni Hirschowitz finally had to save to make in the match, Garson pulled off two one-handed saves to send Faithfold through.”
He added: “We never really turned up in Arctic-like conditions. We move on to our last four games of the season, hoping to grab fifth place in the league.”
Elsewhere, Peter Morrison Trophy quarterfinal clashes between Manchester Maccabi 1st vs Maccabi London Lions White and Manchester Maccabi 2nd vs Redbridge Jewish Care A were called off due to an unplayable pitch.
The Premier Division top of the table fixture between Hendon United Sports and Oakwood A will be rescheduled due to the adverse weather along with Brady Maccabi’s home game with Camden Park.
All three Division One games – Oakwood B vs Los Blancos, Redbridge Jewish Care B vs North London Raiders B and Scrabble vs Redbridge Jewish Care C – fell foul to the snow.
Division Two league leaders Bayern Mincha match was called off as Temple Fortune was unable to raise a team while North London Raiders clash with Fairlop FC was postponed due to an unplayable pitch.