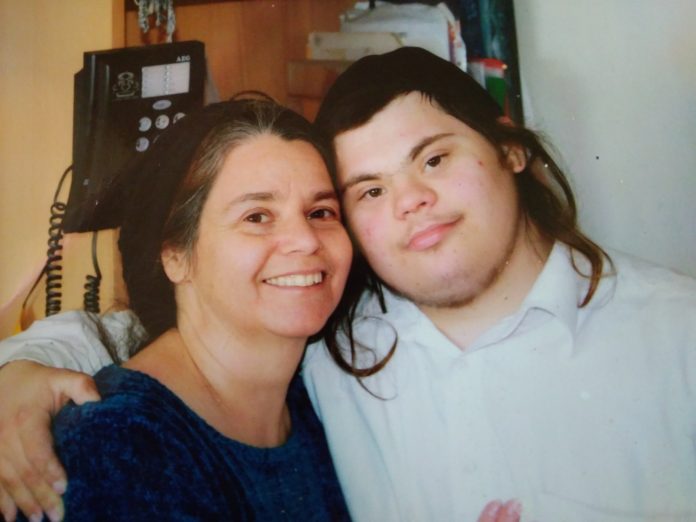 “A special needs child opens a place in your heart that no one else can open” asserts Chaya Ben Baruch. Certainly, she is more uniquely qualified than most to make this statement.

Fascinated by the exemplary devotion of sea otters to their young, Chaya initially studied marine biology in Fairbanks, Alaska. Her maternal instinct led her to subsequently embark on a midwifery course.

In the vast outdoor landscape of Alaska which was so insulated by snow that no one but Hashem could hear her cry, she poured out her heart to Him. She pleaded with Him to grant her a child that would live.

Shortly afterwards, she became pregnant with her sixth child. Despite being subjected to tests, none revealed that the child she was carrying was in fact a Down Syndrome baby. When the baby was born, the helical rims of his ears were folded over and this deformity is often associated with Down Syndrome.  Chaya alerted the doctors to this but initially, due to the fact that he did not have any other apparent symptoms of Down Syndrome, her suspicions were dismissed and she was instructed to “just take him home and love him”.

For the first week of his life, Chaya did indeed do just that.  She felt so blessed to have had her prayers answered and to have been granted a baby that had survived full-term. She was elated and developed an intense connection with her baby.

Once the baby, Avichai, was later confirmed to be suffering from Down Syndrome, this development was inconsequential to Chaya and she was almost oblivious to it. She was eternally grateful to Hashem for acceding to her request.

As a result of Avichai’s birth, Chaya attended a conference for mothers of special needs children and her path crossed with that of a lady who had lost twins suffering from Cystic Fibrosis at the tender age of eighteen. After reading her sons’ diary which they had maintained during their lifetime, the lady confided in Chaya that she was convinced  that the opportunity to empathise with each other had sustained the twins emotionally through their ordeals.

This struck a chord with Chaya, herself a twin.  She resolved to adopt a special needs child so as to ensure that Avichai would not be alone in his experience as a Down Syndrome child.  Fortunately, Chaya’s husband, Yisroel, was supportive of her plan and when Avichai was one year old, the couple adopted a Down Syndrome baby girl, Keren. The two children bonded immediately.

The couple then moved to Israel with their three children.  Though Chaya’s children from her first marriage decided to stay in Alaska and this was almost unbearably heart-wrenching for her, she felt that it would be easier to raise two Down Syndrome children in Israel than Alaska.

To Chaya’s dismay, life in Israel with two Down Syndrome children posed its own challenges and heartaches. They were refused permission to live on seven kibbutzes the owners of which were unwilling to accept two special needs children on their campuses. When they eventually found somewhere to live in Zfat, she encountered painful rejection by some mothers who would deliberately cross the street when they saw Avichai as they were afraid that his condition was contagious.

Undeterred, Chaya and Yisroel then proceeded to adopt two other Down Syndrome children who had been abandoned by their parents or whose parents felt overwhelmed and simply unable to cope.  They also fostered a Down Syndrome child who tragically died.

One of the children they adopted had been born to a single mother who felt out of her depth with an ailing, special needs child.   The Ben Baruchs had expressed the desire to adopt him but the State’s Welfare Department had declared that the child was too fragile to live in a family home and should instead be delivered to an institution.

Firmly believing that they could shower the baby with more attention than an institution, the Ben Baruchs, despite being far from rich, hired a lawyer to fight their cause.  They had the full support of the baby’s mother who had seen how Chaya and her husband had attended to her baby on a daily basis in the hospital, bringing toys, music and unending love to her baby’s bedside. The judge, moved by their sincerity and devotion, ruled in their favour.

Chaya founded the organisation ‘Birkat Haderech’ which aims to provide encouragement and emotional support to mothers of Down Syndrome children. Should any of the mothers be absolutely adamant that they do not wish to keep their babies, Birkat Haderech finds Jewish homes for the children so that they are not institutionalised.

Perhaps the most striking facet of Chaya’s achievements lies in her view of both herself and those she has helped.  She is an extremely non-judgmental individual and never criticises any of the mothers who have decided to give up their children for adoption. She appreciates the incredible trauma and shock associated with giving birth to a Down Syndrome baby and acknowledges the fact that since Avichai was not immediately diagnosed with Down Syndrome, she was fortunate in that she was afforded some time in which to bond with her baby before becoming aware of his condition.

Moreover, she does not consider herself to be anyone special. For Chaya, adopting the children and establishing Birkat Haderech are simply the fulfilment of her heart’s desire.  She says of the children she adopted – ‘I love them as much as I love my own.’  Indeed, for Chaya Ben Baruch, it’s all quite simply been a labour of love.