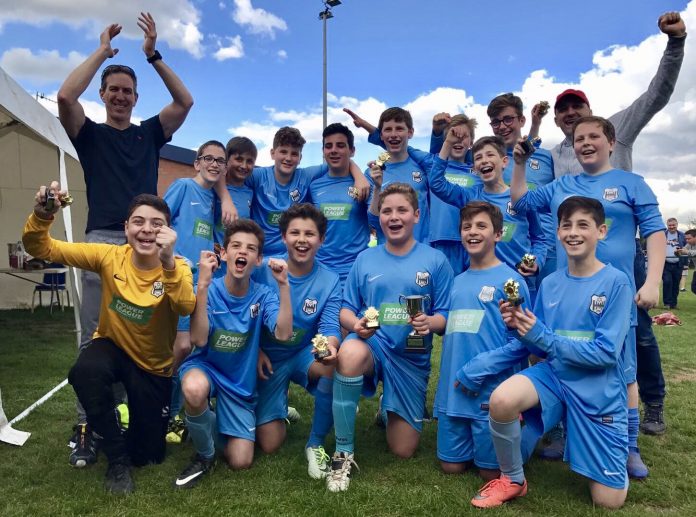 Barnett’s 63rd minute strike brought double joy for the MJSL champions against a Leeds Maccabi team who were going for a second cup triumph.

Harold Feldman Trophy winners Maccabi had stunned Mike Bloomberg’s team a week ago with a 3-1 triumph but the Merseysiders controlled this clash and ran out deserved winners.

By the full time whistle the scoreline did not reflect the overall play against a spirited Leeds side who defended with gusto throughout.

“I was really pleased with the response from the lads after last week’s performance against Leeds,” said Bloomberg. “We changed the system because they overloaded us in midfield, matched up better and dominated.

“The longer the game went on you do get concerned but Leeds were not causing us many problems so it looked like one goal would do it, and thankfully we got it.

“Their ‘keeper had an excellent game but made a slight error for the goal so was unfortunate but that’s football. However, I thought we deserved it.”

He added, “Leeds are a very hard-working side and their centre backs in particular are very good; they made us work hard.

“It was great winning the double in the last game of the season; [more] than perhaps the week before because we’ve ended on a high.

“The lads are really pleased; they deserved it because they put in the effort.

“Coming into the season we didn’t think we would be so successful, but it’s been a pleasure to manager the lads and we hope to keep it going.”

“Haroldeans were brilliant, no doubt about that, they were bang up for it and deserved the win,” said Maccabi boss Adam Kristall.

“One thing about football, consistency is the hardest thing and we were brilliant last week but could not produce the same performance. But we’ve had a great season, better than we could have expected, so to win a cup has been great.

“We’d liked to have pulled off a cup double, but there are no complaints from us. We lost to a better side, which was disappointing, but we’ve competed with the best and know we can challenge next season.”

An early downpour threatened to dampen proceedings, but sunshine eventually prevailed for the 25th year of the competition.

Unlike the last cup final meeting when Leeds looked sharp from the kick off, Haroldeans were up for the midfield battle and bossed proceedings.

Leeds rarely threatened the Haroldeans goal and was thankful for a solid defensive display.

After a goal-less first half Barnett broke the deadlock just after the hour.

Haroldeans completed the victory and received the trophy from Mike and Daniel Shonn.

Max Benmayor was named man of the match.

League presentations were also made to Barnett as Young Player of the Year and Premier League golden boot winner Adam Shiffman as the top goal scorer.