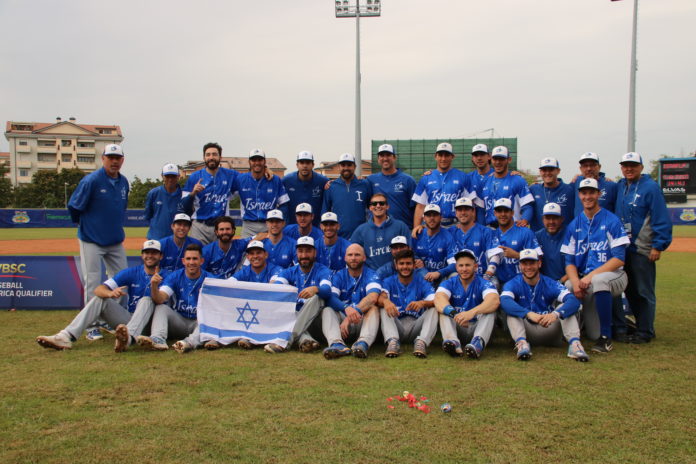 Lavarnway was Most Valuable Player (MVP) in Pool A of the World Baseball Classic. He has also played in the World Series for Boston.

Pitcher, Josh Zeid, has played for the Houston Astros of Major League Baseball. Another pitcher Jared Lakind, plays for the Lancaster Barnstormers in the Atlantic League of Professional Baseball.

The star group coached local baseball players including a Baseball Plus session at the Baptist Village earlier this week and will be working with players in the Israel Baseball Academy (IBA).

A press conference takes place on Sunday at the Israel Olympic Committee offices in Tel Aviv.

“We are very excited to welcome back into Team Israel some of the most exciting players who played for Israel at the World Baseball Classic in 2017, as Israeli citizens now,” commented Peter Kurz, Team Israel General Manager.

“It’s an incredible achievement to have reached the Olympic Games in Tokyo in 2020, but now we are working on putting together the highest quality roster that will give us the best chance of coming home with an Olympic medal.”

The squad has a core of Israeli-born players from the IBA development program. All are Israeli citizens and include Jewish-American baseball players.

During the qualifiers, Israel defeated Spain, Italy and European champions Netherlands before a setback against the Czech Republic. Boasting a 3-1 tournament record, Israel faced South Africa for Olympic qualification. And in a stunning display prevailed.

The first Israeli team sport to qualify for an Olympics since the national football side participated at the 1976 Montreal games, Team Israel will be one of six teams at the baseball competition.

A sparse crowd witnessed the historic game but some 1,000 fans watched live action on YouTube.

The glory run initially began during the summer at the Confederation of European Baseball European Championships in Blagoevgrad, Bulgaria, when after a round robin series of games, a second clash against Russia, which went to extra innings saw Israel triumph in the 10th inning.

Israel then overcame Lithuania in a best-of three championship game.

The IAB, which brings together Israelis of various ethnicities, promotes and teaches the game of baseball in Israel. Around 1,000 players play in the IAB’s leagues from ages six to adults.

A group of expat baseball enthusiasts established the IAB in 1986 to develop the sport in Israel.

The organisation ‎works with a network of coaches and players throughout Israel, coaching baseball at clinics and camps. Facilitating leagues they coordinate Team Israel in competitions around the world.

In 2014, the IAB launched the Israel Baseball Academy, recognised by Major League Baseball as an elite program for 14 to 21-year-old baseball players. The Baseball Le’Kulam program brings together Jewish and Arab-Israeli 6th graders three times a year to play baseball.