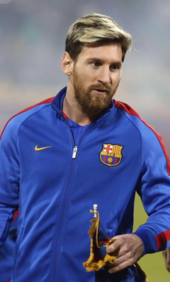 Israeli football fans got to see Lionel Messi in action in a high profile friendly against South American rivals Uruguay that finished 2-2 at Bloomfield Stadium in Tel Aviv last Sunday.

And Messi had the final word to an entertaining clash when he rolled in an injury-time penalty for a share of the spoils to the biggest roar from a packed crowd.

His 70th goal for country takes him to within seven goals of matching Pele’s all-time record for a South American nation.

Uruguay took a second-half lead when Messi’s Barcelona team-mate Luis Suarez set up Edinson Cavani for the opening goal of the clash.

Messi, on the back of his 34th hat-trick against Celta Viga earlier this month was in fine form.

Minutes later, Suarez took centre stage with a superb free kick but Messi made his mark a minute into stoppage time when Israeli referee Roi Reinshreiber awarded a spot kick.

Messi was back in action following a three-month ban for disparaging comments after the Copa America in the summer. The Argentina-Uruguay clash was his 138th cap for his country and 198th meeting between the two nations.

Messi was due to play in Jerusalem as a warmup to the Russia World Cup. But the game was postponed following protests in the West Bank that led to safety concerns.

Uruguay arrived in Israel on Saturday after a friendly in Hungary, Argentina took a direct flight from Saudi Arabia following the Brazil match.

Culture and Sports Minister Miri Regev criticised politicising the event as it was played in Jerusalem and organising photograph opportunities with Messi.

Critics of Regev pointed out that Messi is the most recognised player in global football.

And Israeli fans were thankful to Canadian-Israeli billionaire philanthropist Sylvan Adams for organising the much-anticipated clash.